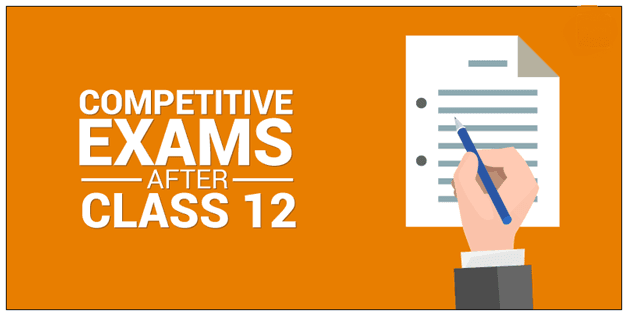 Once you have completed your 12th Pass Exams, you may be thinking about what is my future and which course should I take. It may be confusing and burd

Once you have completed your 12th Pass Exams, you may be thinking about what is my future and which course should I take. It may be confusing and burdening to choose a specific field after the 12th Pass. Your career depends upon the Competitive exam which you take after your 12th Standard. Students must choose wisely which entrance should they write once they complete their 12th Standard. There are a lot of Competitive exams to choose from. Students can choose the exam which is both regionally and nationally to get placed into the best colleges of Engineering, designing, medical, agriculture, pharmacy, arts and many more.

Here in this article, we have covered the best Competitive Exams after 12th Pass for conventional & unconventional UG Courses. There are some National Level Entrance Exams and State Level Entrance exams where students can take part off.

JEE Main is a national Level Exam conducted by the Central Board of Secondary Education after the completion of 12th Class. This exam is for the admissions to Engineering Programs at NITs, IITs and other central institutions like IIST. This exam was previously known as AIEEE.

JEE Advanced is conducted by the IITs and the candidates who qualify the JEE Mains are eligible to take the test. The exam consists of two papers. The duration of each paper is 3 hours.

Birla Institue of Technology and Science conducts the BITSAT Exam for the 12th Class students for admissions to the engineering courses at BITS campus in Pilani, Goa, and Hyderabad.

Other Engineering Entrance Exams are

National Aptitude Test is an architecture exam for the admission to B.Arch Courses in India. The application forms for NATA will be available in the month of March and candidates can take the exam on any working day from March to August.

All India Institue of Medical Sciences conducts the entrance exam for the class 12 students to get the MBBS admission in AIIMS Delhi and other six AIIMS institutions all over India. There will be limited Seats for AIIMS Entrance Examination.

Other Medical Exams after 12th Class are:

It is an all India Level Entrance exam for those students who wish to join any defense force and serve the nation. Once the student gets qualified NDA and NA they can join Army, Air Force & Navy as per their passing percentage.

Other Defence & Marine Exams are

Other Law Entrance Exams are

National Institue of Fashion Technology conducts the entrance test for admissions to its bachelor’s programs.

Demarcating the contours of virtualization 0

Daily Habits That Will Bring Joy to Your Life 0

How Are Mirror Mirror on The Wall And The Mandela Effect Related? 0