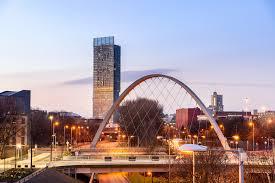 It must be an easy job for the English Ministry of Tourism and Heritage to attract new visitors from all around the world. Nearly everyone on this pla

How to Choose the Best Ticket Plane to Costa Rica?
8 best places for Wildlife tours in Karnataka
Discover Canada: Exploring a Better Place to Live

It must be an easy job for the English Ministry of Tourism and Heritage to attract new visitors from all around the world. Nearly everyone on this planet heard about a Big Ban, Bachigdam Palace or the rock and roll glory of Liverpool. But there are other amazing and exciting cities to visit in England that shamefully get overlooked from the great fame of its counterparts. Be prepared to meet the selection of lesser-known cities of this nation and maybe spend some time in one of them soon.

The small beating heart of England shocked the whole planet when they won the most prestigious football league on the planet recently. But there must be a reason why so many people chose to pick Christmas party in Leicester for their destination every winter. With a population of around 350.000, this city proves to have everything that you might want to have from one of the oldest cities in England. Pub culture, warm residents, great food and amazing National Space Centre that is a museum and educational resource covering the fields of space, science, and astronomy, along with a space research programme. Football enthusiasts can pay a visit to the famous stadium but whatever reason may be for your visit to Leicester be careful because the risk of falling in love with middle England is very big.

Oh, electronic music fans love this place! With around 100.000 people more than Leicester, it has the 10th-largest population in England. Located on the western coast of the island the city is situated on the River Frome and River Avon and was an important trading post even in the Roman Times. Today, Bristol is a buzzing, cosmopolitan city with one of the most famous universities in all of the UK. All the red brick architecture that you want an amazing music venue to have the best dancing moments that you can attract thousands of youngsters to this party hub every weekend. This city has an amazing exciting atmosphere in the air all the time and it even has its very own currency – the Bristol Pound! Launched in 2012 and still going strong…

Located about 20 kilometers from Bristol, this place was voted the happiest city in the UK! So if you’re sad the energy that this city will provide may turn you over. Bath has more than 4,500 buildings characterized by its architectural value. In it, you will always find a building of interest that will fascinate you. Especially the impressive Roman baths that are kept in amazing condition. The famous Pulteney Bridge adorned the postcards sent from this city for decades and dining in its surrounding may as well provide you with that famous “Tranquility feeling of Bath”. If that doesn’t do the trick, then the lush paradise of Prior Park estate located designed in the 18th century will certainly will.

The bastion of English culture in the north still has a strong influence on its Victorian origins. It doesn’t matter who you will travel with, there will be a huge Zoo, an amazing Victorian Tower, Victorian houses and the Row (the central area of ​​Chester) where you can have some of the best time of your life. Stroll and admire boutique windows in fashion, while marveling at a futuristic architecture over medieval monuments. That is the feeling that Chester city can provide you and you will be amazed that you never had an idea to visit this place before. Certainly, this will prove to be one of the best cities to visit with the family if you want to get in touch with northern England.

the largest city in the county of Derbyshire, and the main one. It is really steeped in history with its roots dating back to Roman times. Roman legionaries planted their base camp on the banks of the river Derwent and many years after that the city was founded by the Danes. In the Industrial Revolution, the city started to gain the glory and name that it has today. It stands as a  center for advanced transport manufacturing as famous home to the world’s second largest aero-engine manufacturer Rolls-Royce. Today everyone who gets an opportunity to walk along the Derby streets gets surprised by the bustling energy of the streets and the way this city turned out to be one of the most important business centers of all the UK.

10 BEST Places to Visit in Virar 0

Why Choose Jabong Discount For Shopping In Online? 0

Your Personal Guide to Buying the Best Pallet 0