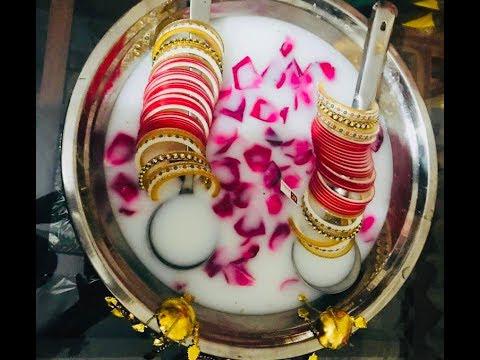 Why the bridal chura ceremony is crucial to weddings in India?

Ganesh poojan, mehendi ceremony, sangeet, wedding, and reception. This is the socially followed week-long celebration at Indian weddings. But is this

Ganesh poojan, mehendi ceremony, sangeet, wedding, and reception. This is the socially followed week-long celebration at Indian weddings. But is this all? It will not be wrong to say that traditions, cultures, and values are the backbone of weddings in India. As the generations are moving ahead, the rituals are becoming less and less relevant. Nowadays the wedding functions are just limited to party, food, and alcohol. Hence the onus falls on our shoulders to enlighten people about the reasons why certain set of rites and rituals are followed during marriage ceremonies. Today we’ll talk about the bridal chura ceremony.

Everything about the auspicious bridal chura ceremony you should know.

If you have looked at Indian wedding pictures carefully, you must have seen brides wearing large sets of red bangles paired with white bangles in between, at the top and the end. These are called the churas and are blessings of the bride’s maternal uncle and aunt.

It is the tradition for the bride’s mama and maami to send a set of 21 bangles, usually in the colors red/maroon and ivory/white. The bridal chura ceremony takes place at the bride’s home on the wedding day morning before the main event.

The ceremony is worth watching because there are so many small noteworthy things in the procedure itself. The niceties are kick started with a havan or pooja ceremony. It is followed by the cleansing of the bangle set in a concoction made of milk and rose petals.

Bangles are then touched by the close relatives and friends. It signifies the blessing of chura, indirectly wishing the bride with a happy and flourishing married life. The churas are then transferred to the bride’s wrist by her uncle and aunt. But there is a quirky catch here as well. The bride is not allowed to see the churas until the time she is getting married, as a result the bangles are covered with white cloth. The cloth is taken off just before the wedding ceremonies are to begin.

The traditions differ from one community to another.

It is not necessary for all the Hindu weddings to have a bridal chura ceremony at this scale. The event we shared above is mostly common to Punjabi weddings. In other communities like Jain, Baniya, etc the event is limited to usual scale only. The brides of those communities do not wear 21 bangles, the count ranges between 7, 9, or 11. But one common thing in each Hindu community is that churas are considered a part of the solah shringar aka the sixteen adornments of a married woman.

For how long the chura is adorned by newly wedded brides?

An intimate ceremony is organized by the in-laws where the bride takes off the chura after wearing them for a complete one year post the marriage. This event takes place on the first Sankranti post the nuptials, and the bride wears bangles made of glass. The removed bridal churas are taken to a river and are left to float in the water while saying a prayer.

It is considered as one of the most exciting and sought-after ceremonies. The bride’s sisters and friends tie umbrella like metal hangings from her chura. These hangings are called kaleere and they signify their love and remembrance for the bride.

Post the chura wearing ceremony, all the bride’s unmarried sisters and close friends sit in front of her. One by one, the bride shakes her kaleere laden hands on their heads. As per an old-wives’ tale, if any piece (umbrella) of the kaleere drops on their head, that girl is the next in line to tie the know. It is like the bouquet throwing ceremony of weddings in the west.

The ceremonies define the richness of the Indian weddings.It goes without saying that a bridal chura is held in high regard. Both the ceremonies are a pretty emotional affair for the bride’s family and friends. Nowadays brides are storing these valuable moments in a hand-designed box and using it as a décor item. It is said that a bride should not remove the bangles without the “chura wadhana” ceremony (as discussed above). Not all the bangles are removed at once, instead two of the set are left behind to be worn with the glass bangles.

How To Get Loan Against Property From Bajaj Finserv? 0